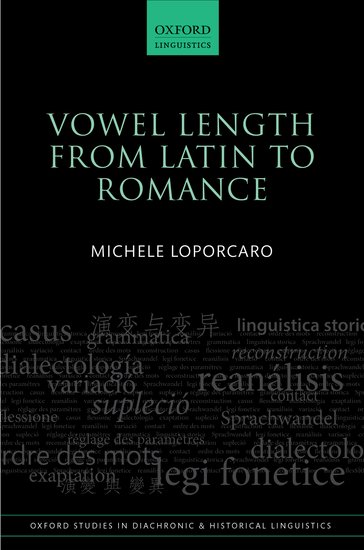 This project investigates the development of vowel quantity (VQ) from Latin, where VQ was contrastive, to the Romance languages and dialects; while none of these has inherited Latin contrastive VQ, a substantial subdivision of them, viz. Northern Romance, has developed a novel VQ contrast. Among the varieties which nowadays don’t display VQ, two structural options can be found, exemplified by Spanish and Italian: both lack distinctive VQ, but whereas in Spanish all stressed vowels have approximately the same duration, regardless of syllable structure ([ˈlaðo] (< latus) ‘side’ =  [ˈgato]  ‘cat’ (< cattum)), in Standard Italian stressed vowels are lengthened in open word-internal syllables (Open Syllable Lengthening Rule, henceforth OSL), when the word occurs prepausally, at least ([ˈlaːto] (< latus) ‘side’ ≠  [ˈgatːo]  ‘cat’ (< cattum)).

The basic question is that of the historical relationship between the Spanish development – shared by all the Ibero-Romance languages and by Romanian –, the Italian (and Sardinian) development, and the option documented for Northern Romance varieties, where we can find minimal pairs like [ˈkaːr] (< carrum) ‘dear.m’ ≠  [ˈkar]  ‘cart’ (< carum) (Northern Italo-Romance, Milanese).

The topic is a much-debated and highly controversial one, in all of its facets, and it has wide empirical implications, since discussion of VQ entails that the relationship be addressed with (the historical development of) stress assignment and syllable structure, consonant gemination (word internal as well as at word boundary, through Raddoppiamento Fonosintattico) and degemination, apocope, diphthongization, etc.

On VQ, as well as on all the related topics just listed, there is an extensive literature. The novelty of the present project consists in its aiming at systematically bringing together different sorts of evidence, which bear on the issue: from philological record, documenting relevant aspects of (Late) Latin and subsequent stages of the Romance languages, to synchronic phonological analysis and experimental phonetic investigation carried out on modern languages and dialects.

Crucially, it will be shown that the areal distribution of the different structural options for the VQ developments will be decisive in testing our hypothesis, i.e. that Proto-Romance, as for vowel length, was like modern Italian, and that – when degemination took place - the varieties attained by the change reacted in either of the two ways: simple rule loss, with consequent demise of OSL, as in the periphery of the Romance areas (Ibero-Romance and Romanian), or loss with restructuring of the underlying representation, as in Northern Italo-Romance, Rhaeto-Romance and several Gallo-Romance varieties – an area which has been argued to have been once more widespread, stretching from the Apennines to Northern France. As it will be shown by an in-depth analyis (also based on phonetic measurement), a crucial trade-off element in the reconstruction of the rise of contrastive VQ in Northern Romance is provided by marginal Northern Italian dialects which have lost VQ at a relatively recent stage – or even are in the process of losing it at present (e.g. Soglio,  Loporcaro et al. 2005; Lizzano in Belvedere, Loporcaro et al. 2006).